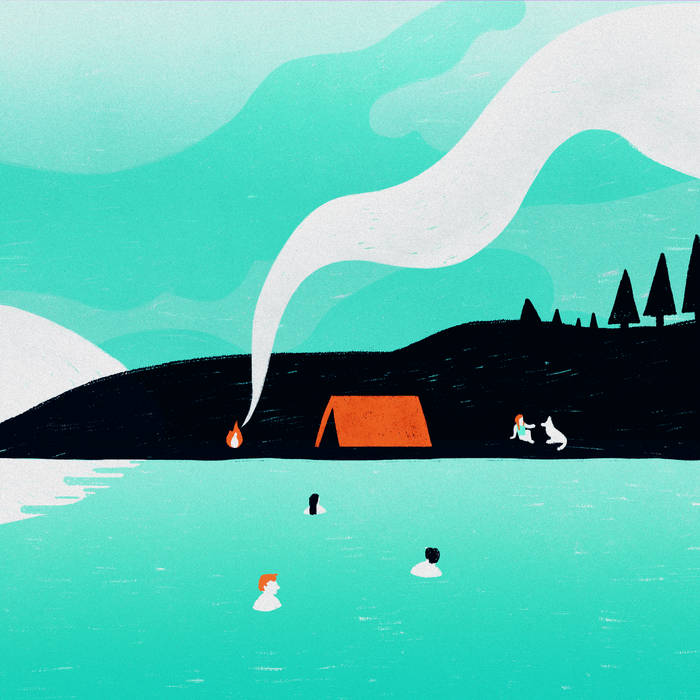 Loss Leader could well be the best band to come out of the 90’s US underground that you never heard of. Which would make sense as they were school kids back then but live and breathe as a band now, at this moment. This is no mere hyperbole as you’d be hard pushed to find a current group that more successfully nails the sound and spirit of those releasing their output on Dischord, Touch and Go or Southern Records in the pre-social media era, when word of mouth, fanzines and basement shows ruled. A band that exudes integrity, friendship and a good ol’ honest love of music. In other words, a band bereft of all the Bs and distractions that sink a high percentage of bands operating today. No desperate trend-chasing but the thrilling sensation of a band that follows their own nose and the sounds that eminate from their own humble practice space. Long distance runners.

The quartet was formed in Madrid in late 2017 by Casta (bass), Paula (drums, backing vox) and Tote (guitar and vocals), all mainstays of the capital city’s punk/DIY scene and members of the likes of Ulises Lima and Wild Animals to name a couple. In December 2018 they released their first self-titled Ep and after playing extensive shows nationally, they filled out their sound with the addition of Guille (keyboards) and toured the UK and France.

After spending 2019 writing new songs and playing shows they recorded their first full-length in November/December of that year. It’s fair to say the recording was somewhat accident prone including recording studios blowing up, neighbours threatening violence and more mishappenings.

The end result is made up of sessions spread over 5 different locations, makeshift studios and home recordings. Due to the nomadic nature of the recording the band considered titling the
album “Nomads” but decided that was an awful name and went with the more ambiguous “Songs About”.

Listening to “Songs About” wouldn’t suggest a fractured recording process as the 10 tracks form a seamless piece where no song outstays its welcome and each one leads to the next in the tradition of your most cherished records. The album comes out of the blocks with “In This Cave”, radiating a vitality only hinted at on their debut Ep and offering a shape of things to come.

Guitars in turns blaring and delicate, sturdy basslines oozing melody, drums infused with the steady heartbeat of slowcore but also the cymbal-heavy rage of punk and subtle keys colouring the whole affair. Tote’s lead vocals come straight from the heart both gruff and frayed with emotion (think messrs Guy, Blake and Geoff) with Paula’s harmonies providing the necessary light and shade. Kill Rock Stars. “Ready for More” is perhaps their most single-worthy moment to date with some tasteful keyboard hooks but third track “Water Falls” proves they are truly sultans of sentiment. Track 4 earns a black belt in Karate and side A goes out with a bang courtesy of the aptly titled “A Personal Feeling” (in serious contention for best track of the album). “March on Rome” ushers in the second side with an irresistible Seam vibe and I’ll be damned if “The Future Me” isn’t the closest thing to a surefire emo-hit on this slab of vinyl. “Nola” starts meek but builds to a hell of a crescendo and “New Year Wishes” soothes with serene bliss before instrumental closing track “Seven Days” further proves their mastery of the slowcore sub-genre, sending the album out to sea and melting the hardest hearts. The lyrics, personal throughout, go from despondent to triumphant and back again, honouring the precious, fleeting moments of everyday life whilst never losing sight of the bigger picture.

“Songs About” is released on the Spanish labels BCore, La Agonia de Vivir, Pifia Recs, Saltamarges, Subpost and Waterslide Records (Japan). The band were planning on a tour of Europe in June but are currently rescheduling for after Summer due to the
current state of affairs. Any self-respecting fan of indie-rock, punk, emo or post-hardcore should own this album.

DIY indie label / distro in Japan since 1996.
We carry tons of new releases and used records. Check our distro. We ship everywhere.

Bandcamp Daily  your guide to the world of Bandcamp

outré black metal, with a Victory Over the Sun interview and music from Liturgy and Jute Gyte.